Just back: Bear facts in your face 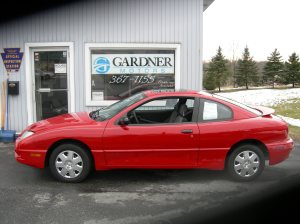 “You’ll get close to nature here” said the Fast-Gas service attendant. His welcoming smile a pleasure though the open car window as he filled up our tank. It was a wonderful chance to the road for our Vancouver rented Pontiac sunbird (a red cruiser of a car) who’s amazing automatic charms were now wearing thin.

“Bliny, don’t get this kind of service on the M25” commented my brother. The service attended nodded but I doubt he full understood the reference to English motorways. More likely he was giggling at two young over excited tourist.

Tom particularly was still buzzing over joyed at capturing a jumping coyote on camera as we had driven along the wide open roads that twisted in and out right up into northern British Columbia’s mountains. We had made it over the Coastal Mountains and were now safely on the other side in a town called Tumbler Ridge, just before the more famous Rocky Mountains. Tom was an eager ammeter photographer and I’d got sick of him photographing my black Labrador, Jack and his longhaired rabbit Gizmo. So for his birthday and mine we had taken a Canadian wildlife trip on a budget. In other words we were winging it. Tumbler Ridge was British Columbia’s waterfall capital and the Monkman Park where it was boasted wildlife galore.

We knew we were getting further from town as the pine trees were now ‘mega-tall’.

“Hey, check it out?” I called, seeing a huge patch of blueberry bushes in full season. The chance to pick, taste and eat real organic wild blueberries was too good to miss knowing the cost of a punnet back home. Right on the roadside seemed safe enough, so long as we pulled the Pontiac right up on to the grass; right? We decided this looked a good stop to pull out our sandwiches and we ate leaning against the car just like when we were kids visiting the Wyre Forest with dad. Seeing movement in the bushes I freaked and jumped into the Pontiac. Tom, of course got out his camera and walked towards it.

We hadn’t ignored the bear aware poster on the ranger’s door. We had our bear spray and bells on our hiking packs. Just Tom had neither on him in that moment. Still, standing at a large bush of blueberries Tom was snapping away with a massive smile on his face.

Slowly I got out of the rental car to see what had Tom feverishly shot gunning his DSLR. A five foot brown bear was the other side of the bush on all fours digging up some roots and half a log. The bear was happily going about getting his 90lbs of daily ‘yum-yum’. Between Tom and two paces from the car I stood when a logging truck went by.

We all jumped at the sudden roar of 18 wheels going down a poorly surfaced road at 90kph. Kodiak bear rose up on his hind a whopping ten foot hulk or there about. Tom snapped one more shot and to my horror broke rule number 2 of bear aware.

Kodiak bear went with his instincts thinking “I’ll chase that and then have the bush to myself.”

I got up to 30mph basting the horn with both doors still open and the red Pontiac sunbird flashing her warning lights in protest at the lack of considerate driving.

“Tom? Are you okay?” I was yelling over the noise.

Hot breath panted on my neck, a wave of fear engulfed me again. Daring to look over my shoulder to be face to face with… my brother.

As red faced as the car “Gee! Tubby, Bear, Can, Run!” he laughed and puffed “And he broke my camera” Tom added closing the backdoor.

My reply to Tom? Well let’s just say I reminded him that the Gas attendant had warned we would get close to nature.

Located on Pershore Road, two miles south of Birmingham City Centre, Birmingham Wildlife Conservation Park home to a variety of different animals.Some species they are working with are critically endangered in the wild such as the Yellow Breasted Capuchin Monkeys. 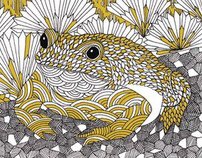 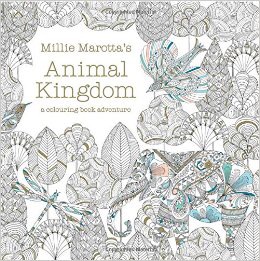 Millie Marotta is a hugely popular illustrator and her idiosyncratic drawings of the world’s wonderful creatures will draw you in. Millie’s Animal Kingdom offers a range of beautiful illustration on quality paper to personalise and make your own.

The artist’s intricate style of illustration will get you itching for a pen, whether it’s to add to the fine line hatching on the birds, the flowing tendrils of a jellyfish, or the composite of flowers that make up a grizzly bear. The work will inspire you to appreciate the detail of line drawing and its huge potential.

Sketching out  the basic shapes that make the butterflies I want to draw and a couple of Millie’s  unusual trees. Then with a black biro pen working into patterns the new image.