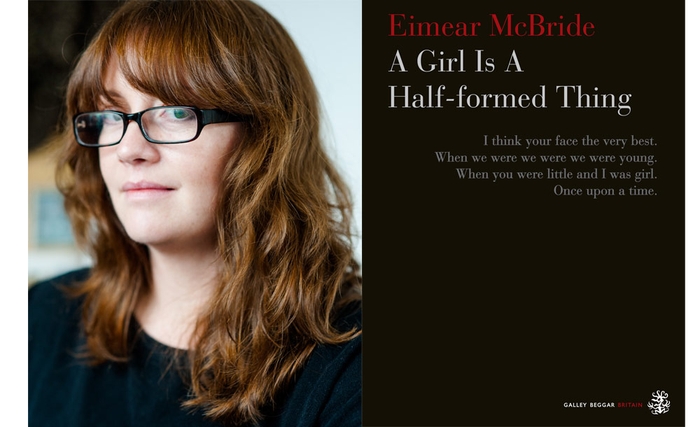 We were not permitted to take photos so this is a stock photo.

Thanks to an email from Wolverhampton University I was able to tag along to an event by the Transcultural Research Centre.

Eimear McBride is an Irish novelist whose first book A Girl is Half-formed Thing has won Irish novel of the year 2013 and the 2013 Goldsmiths prize (and more). We were able to listen to her speak about the book and about her experience of being a writer.

McBride wrote the book when she was 27 however it took 9 years to find a publisher. She had trained as an actress and moved to London so the first question was how did this book come to be?

“I was always writing as a child. Leaving acting was easy as I was sure that I was not that great at it. So I did temp work and wrote and wrote finally I took six months off to write the book. That same week my handbag containing all my handwritten notes got stolen. I had to start over a fresh, but I think it might have helped. I wrote 1000 words a day then the next day I deleted about 800+ and wrote another 1000 until it was done.”

Even though you wrote the book in six month it took nine years to publish?

“Yep. I just kept sending it out until if found the right person, or the right time.”

Its written in a poetic style is that your style or just for this book?

“Just this one so far, I adore James Joyce he and I enjoy language and pose. I knew I wanted to write from the characters point of view and as she thought.”

“James Joyce inspires me as an Irish witter he wrote about Irish women but he did not write about what it is to be an Irish woman. I write from within this woman, my character. I have a modernism style I guess, but I really look at modernism as a tool for expressing the physical experience the character has. Putting the soul back into the body you could say. I wanted to re-connect the wording and reader to the physical being of the character. When you read the book you can understand this aim better. ”

Is this story written for girls in mind or women in general?

“Not at all, it is defiantly not for young girls to read. The book is about a person being a woman but I find that men enjoy it too. It is interesting to both genders to explore a person’s story. In my opinion you should not write as a gender but as a human. The book won women’s awards and this was just a helpful platform for the publicity not a division for it to be in solely.”

Do you think that you needed to be out of Ireland to be able to write about it?

“Yes I think it’s much harder to write about a place when you in it every day. It is easier to write what you remember.”

Do you feel people try to put you in boxes assuming you are part of your character, in some places or experiences during the book?

“No because I made it very clear this was a work of fiction. I do not talk about my own life or project my experience on to this character. My character is very physical and makes physical choices and that’s why I like her. Life is wasted on the passive. She insists on her right to be active and that’s her empowerment. I wrote her that way.”

What advice would you give to new witters emerging into the industry today?

“Well people will have expectations, but I write what I want and what I feel, not really caring about what might be trending. So, my advice is to write for you. Look at it and know what is yours. Don’t change it to meet someone else’s desire. Keep going with a story until you know when it is right to stop.”