An open day at university leads to an awesome moment in my life. A tutor from Worcester University had chatted with me and we had laughed at my eagerness but lack of portfolio. He later called me to see if I wanted to join the class in meeting Axel Scheffler at the Hive later on in the week.  At first I did that classic, but very common “you don’t mean the Gruffalo guy, right?” Yes, (more laughing at me.) And yes that is just one of his famous illustrations but my no means is it all he has done.

Axel Scheffler started by fondly telling us about his move to England in 1982 to study Visual Communication at the Bath Academy of Art. How meeting others with creative and open minds can really get you going. Axel had a tone of honest reality as he relayed the accounts of taking his portfolio around to different publishers and magazines. He recommended always taking your current sketch book with you. “Often people like the more free and flowing look of a sketch book” Alex spoke about sending images off in the post and hearing nothing back for ages if at all. Then he got his first commission. Faber commissioned him to illustrate The Piemakers by Helen Cresswell . In 1989, Walker Books from London asked Axel to illustrate a text by Jon Blake; You’re a Hero, Daley B.

The successful collaboration of Alex Scheffler and Julia Donaldson happened in 1991. “Julia had been writing songs for the BBC when a friend told her they would make great children’s books” Alex told us “when Macmillan Children’s books took her up, they introduced us to each other.” 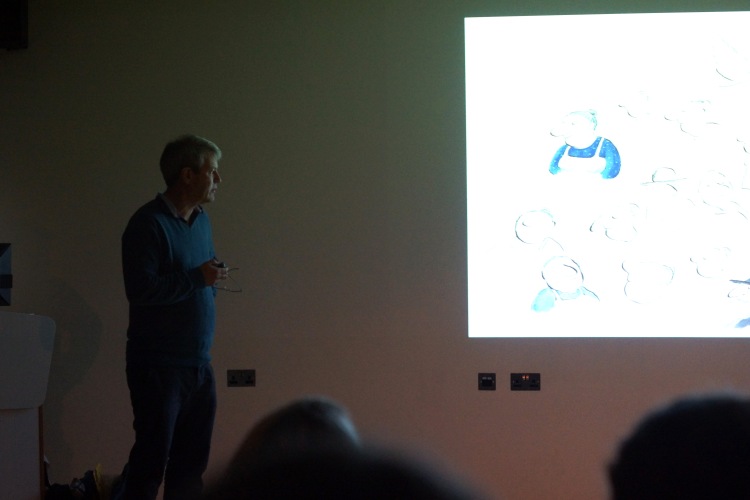 Q: When did you know the Gruffalo was going to look like he does?

A: Lots of sketching based on Julia’s description in her text was the basic starting point. I had done him with clothes; in fact I had done all the animals with clothes. But Julia looked them over and just did not like it.

Q: How does the text come to you?

A: Sometimes it is just emailed and you decide the layout and what to draw creating a kind of dummy book which you send back. Publishes then look at that and make changes. They always make changes. Other times they send me the dummy book with the layout and text and I will know there they what the illustration and how much of the page to illustrate. But that’s never the end, because publishers sell to other countries this is called co-addition sales. They too can ask for anything to be changed.

Q: What sort of things have you been asked to change?

A: Lots of things, anything. An example is with the book A Squash and A Squeeze in the Macmillan book the goat had udders but when it was sold to the American publisher they wanted the udders removed as they didn’t find it appropriate. Just lots of things like that and practical things like moving the layout because the amount of text or even direction of text is different.

Q: Have you ever written a children’s book?

A: Only one as I’m not a writer. Pixi publishing who make little books were doing their 1000 print and they asked me if I would give then a picture book. The story was about a squirrel that got blown out of a tree. But it was not amazing like I said I’m not a writer.

Q: What one piece of advice would you give to those illustrators who are now leaving university?

A: Never say no to work; you just never know where that will lead. Illustration is an applied art. So listen to what they (publishers and editors) say to you it is in both your interests to make the work sellable. Compromise is good, yet you should always keep your own style. (He smiles) That’s all my advice.

Q: What are you working on now?

A: Just completing another picture book with Julia Donaldson; The Scarecrow’s Wedding.