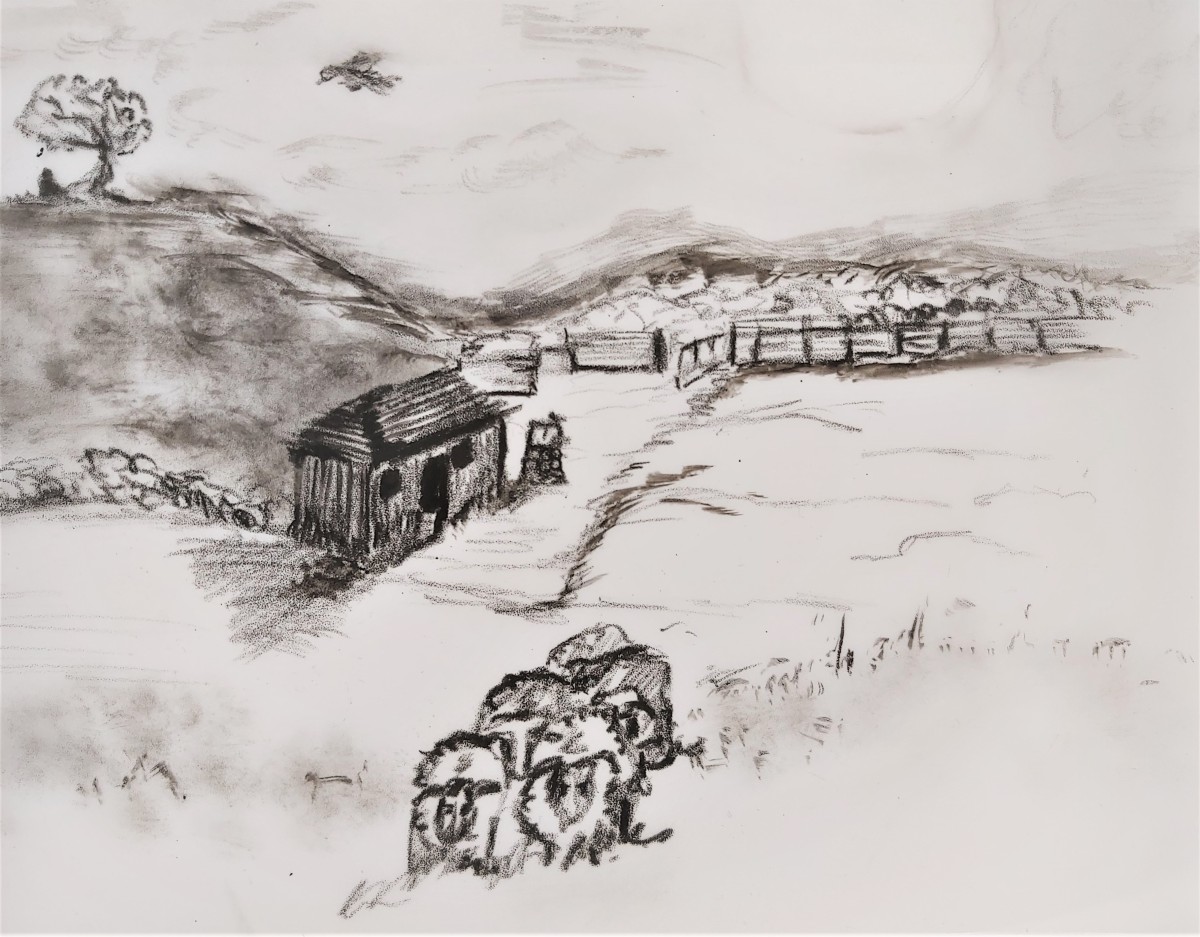 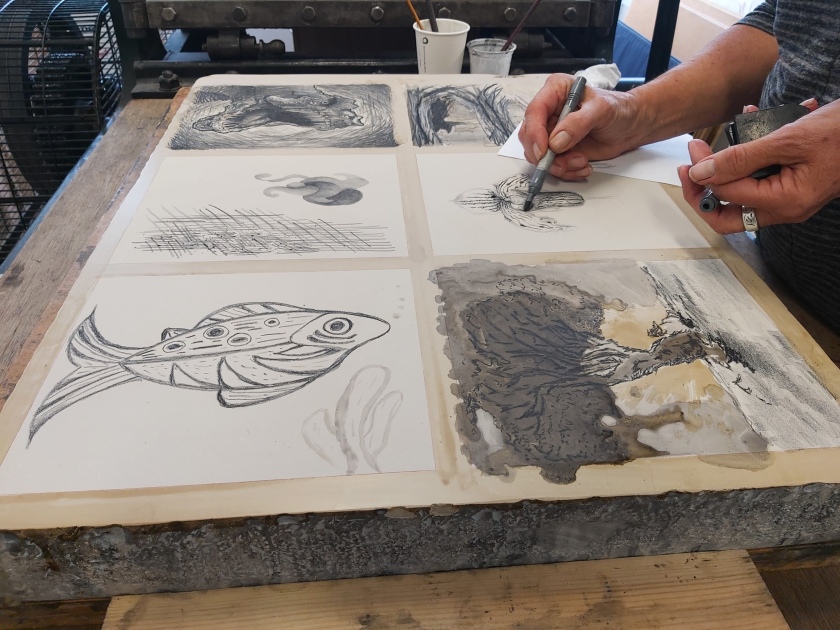 Lithography is a planographic printing process that makes use of the immiscibility of grease and water (the principle that oil and water do not mix). In the lithographic process, ink applied to a grease-treated image on the flat printing surface, done from a stone (lithographic limestone) or a metal plate with a grained surface. (Attwood, 2003.) Due to the need for time management, our group did both processes simultaneously. I was able to grasp the basic non-image (blank) areas, would hold moisture and will repel the lithographic oil-based ink were the blacked areas the ink would be accepted — inking of one colour at that time.

Other parts of the process, I find complex and am struggling to understand. In the off-set process, my image moves on to the aluminium printing plates with the use of phytochemical transferences, much like the screenprinting process I’ve used in the past. With positive plate-making, a positive film is “the original” meaning the non-translucent, blackened sections of the film correspond to the ink-accepting surface elements on the plate.

Phil explained at this point if the images were transferred directly to paper from the plate, it would create a mirror-type image, but also, the paper would become too wet. Instead, the plate rolls against a cylinder covered with a rubber blanket, which squeezes away the water, picks up the ink and transfers it to the paper with uniform pressure. The blanket cylinder passes over the paper counter-pressure, and the image transferred to the paper. “Because the image is first transferred, or offset to the rubber blanket cylinder, this reproduction method is known as offset lithography” (Attwood, 2003)

The stone lithography process is a more lengthy technique and has taken me longer to understand. The process uses gum arabic. The purpose of the gum is to chemically separate the image and the non-image areas so that the greasy image areas become water repellent; which I found out is called ‘hydrophobic’ and the non-image areas become water receptive or ‘hydrophilic’, (Attwood, 2003) so that when printed, only the image areas receive the ink print. Phil explained this chemical change happens only in the very top layer of the stone, creating the ‘gum adsorb layer’ which is less than 1mm thick.

He further explained that Nitric acid is sometimes added to the gum to stop the grease in the stone from spreading. Nitric used in the gum its referred to as an ‘etch.’

It is usually necessary to ‘etch’ the stone twice. The first etch Phil applied to the stone with a clean sponge. Once Phil covered the whole stone was with gum, a clean sponge and then a clean rag is used to buff the gum down to a thin, even layer. Heat is then applied to dry the gum. The stone should then be covered and, left (overnight if possible) to allow time for the gum to chemically change the stone and establish the image within the stone. We didn’t have that time, so we used our lunch hour as the etch time.

Next, we were shown how to removes the drawing materials from the stone and replaces it with non-drying black ink.

For me, this was the most confusing part. I went to the internet to get a better understanding, [https://www.artprintsa.com/lithography.html].  A wet rag is used to remove the gum arabic from the first etch. A damp cloth is wiped over the stone to remove the excess water. The stone is then dried and dusted with fine chalk before a second gum arabic etch is applied. The gum etches, then buffed down to a thin layer and dried, and the stone should be left to rest for at least an hour before proofing.

The stone is washed out – as before. (The stone is gummed and dried, then washed, and the gum washed off.) (Attwood,2003)

At this moment we began to need two people to get a good print. While the stone is damp, the greasy printing ink is rolled on using either a leather roller (we used a Non-drying black ink.) until the image in the stone is clearly visible, We found a good technique was to re-damping the stone between rolls to keep the surface from drying out, thus needing two of us to work together.

The first few proofs were taken onto newsprint, and after that, damp paper is usually used to ensure the maximum amount of detail is picked up from the stone. The paper is laid onto the stone, and a few sheets of newsprint packing laid on top. The stone and paper are then rolled through the direct transfer press, and the paper is then pulled back from the stone to reveal the printed image.

Despite the long involved process of stone lithography, the image quality is awesome compared to the offset lithography. Every mark and wash I made transferred. However, its deeply involved process has made me reluctant to attempt it again on my own. 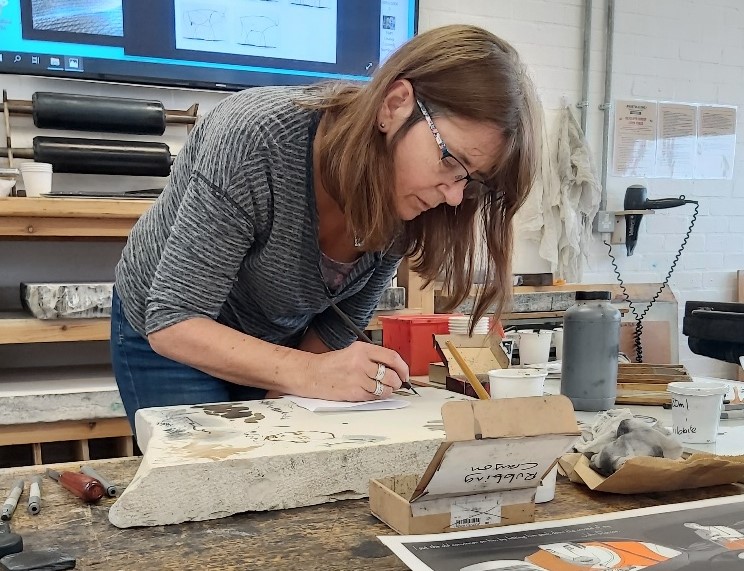